CrazyCash review: A Vid Chat/Cam Site Not Many Know 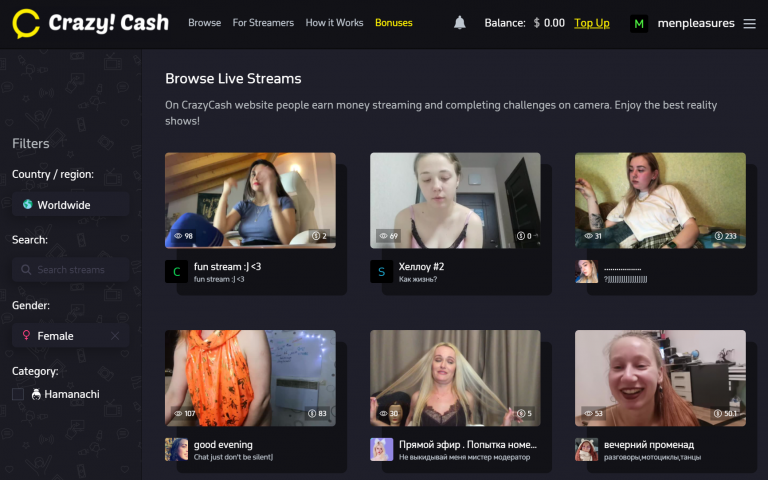 If you want to chat with normal girls & guys on an adult platform, where almost 100% are amateurs and take it to places where Bigo and the like can’t, then this CrazyCash review is an example of one arena that not a lot of people have heard about.

You won’t find CrazyCash.tv on offervault.com which is where pretty much all the Cam sites can be found including the best free live sex platforms and their respective CPA Networks they operate through.

However, depending on the time of day, there may be as few as 20 live streamers, both sexes, more girls though, some cosplay, no trans spotted.

You can register and watch for free and tip if you fancy to dictate play or you can piggyback off others and see where it leads.

There are some stunning women and some less so. It’s not 100% show, maybe 30%, there’s quite often a couple of girls chatting but can often lead to developments.

It’s pretty quiet but for sure it’s raunchy. Not as in your face as Chaturbate and those semi-pornstar sites. It’s nothing like those. It’s probably the closest to an app like Vk.com but an adult version.

A hybrid of sorts.

Mostly Russian girls it seems although the site is split in two – US and Russian languages. It hasn’t taken off like stripchat or vk.com more appropriately, but closer to vk’s numbers.

Maybe it’ll grow, but as it can’t be found on offervault, it won’t get nearly as much traction from potential affiliates as it’s just not getting listed on any of the affiliate networks.

Maybe it has legs, time will tell.

It definitely features a more Russian audience going by the chat boxes.

It’s a live video streaming app for adult behaviour – it’s not a cam site per se.

There may be more explicit happenings in the private arenas.

It is available also as an app on android but not it appears on apple.

For streamers CrazyCash.tv offer a whopping 70% take home, which in comparison to IMLive’s revised 12.5% makes you wonder why people aren’t flocking – clearly the male clientele just don’t know about it or something else is up.