A quick point in reference: electronic male masturbatory devices are generally either referred to as an “auto bj machine” or a “hands free male masturbator” – the former ideally replicates the sensation of the mouth, the other the honeypot. (Note – strapping in butt or non-anatomical textured sleeves is also possible with some mechanical strokers as opposed to their inbuilt ones).

Whichever you decide to opt for, you’ll want one which is a genuinely powerful machine (for speed and longevity), comes with a texture that delivers great suction (or one of your choice), and has a decent run-time – of at least an hour.

Preferences like weight and size, while important, should be your secondary concern for now if you want your automatic stroker to mimic the real deal.

Unfortunately, the technology doesn’t exist yet for pocket-sized auto bj stroking devices although they’re undoubtedly in the process of inventing one – an automated sucking travel buddy could make for some interesting driving. 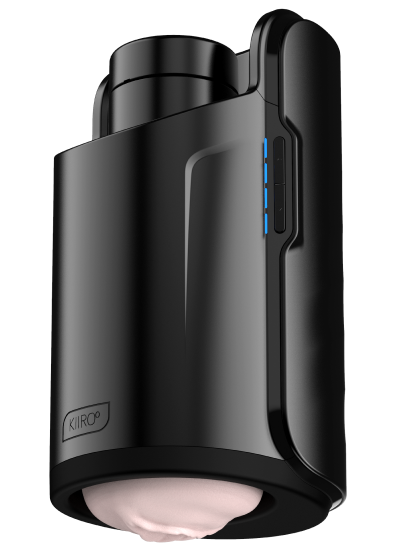 When Fleshlight and Kiiroo went their separate ways after collaborating on the Fleshlight Launch which for now is no longer, Kiiroo took it upon themselves to take note of users suggested improvements as well as dislikes and applied most of them to create the new Kiiroo Keon.

This is how the Launch looked, … yeah right. The Keon is 4 inches shorter than the Launch. It stands at 8.7 inches.

Additionally, while it comes with an excellent sleeve – soft, gripping but neither too tight nor too loose for most men due to Kiiroo’s classy patented designs, you can replace it with a sleeve of your own, just check the dimensions of the casing don’t exceed 3.3 inches in diameter or there abouts. Like the Universal Launch below the Keon will contain most of Fleshlights models as well as the Feel Stars by Kiiroo.

The Kiiroo Keon can just about be used handsfree on the lowest or highest speed with the shortest stroke settings – it should stay in place but you may find a pillow will help for support.

When you tilt it to the side you’ll find it grips your shaft firmer and higher speeds mean invariably you won’t last as long but this could be a good way to work on your edging – when you come close to climax then pull out.

The Kiiroo Keon is an improvement on the Launch on a few fronts but there’s no denying that when the Launch originally came out it, there was nothing to match it. It was the first high quality automatic male masturbator of its kind.

But the Keon fortunately trumps it. It has improved most on 5 fronts.

How the Keon compares with its predecessor the Launch

1. The Keon is quieter, more compact and full of more throttle.

2. Easier to hold with just one hand.

5. The casing is 4 inches shorter than the Launch

The Kiiroo Keon has 2 modes, one manual one interactive. There is a two second pause when you switch between the two.

On manual you can control speed and stroke length; interactive requires you to turn on your bluetooth and fire up the Feelconnect 3.0 app. From your device you can manually control the Keon through the apps touch control options.

Alternatively your partner on a video chat call can take up the reigns, or cam girls at places like Stripchat and Chaturbate provide 2D/VR hook up.

When you prepare for the Keon, the warming lube which comes with it is a must. Warming lube isn’t actually warm when you apply it, but after a few strokes it lives up to its name. Try to avoid adding it to the tip as it can be a little sensitive, but the shaft will do just fine.

The Keon does pack a bit of weight but it’s compact and easy to hold on to. The controls are positioned on the side of the device. Nice touch.

As mentioned, the Keon will adapt to most of Kiiroo’s Feel Star sleeves as well as the lions share of the Fleshlight range. You can also take the sleeves out of their original casing and slip straight in given the right diameter.

The manual Feel Stroker which accompanies the Keon features a sleeve rich in spiral ridges, which create a delicious sensation along the shaft and around rim.

And when these tender shaped nurdles combine with the warming lube and swivel around your member at 5 strokes a second – lying there with your arms behind your head, can be a deeply blissful experience. Enjoy at your peril!

Tips for using the Kiiroo Keon from the pleasure forums 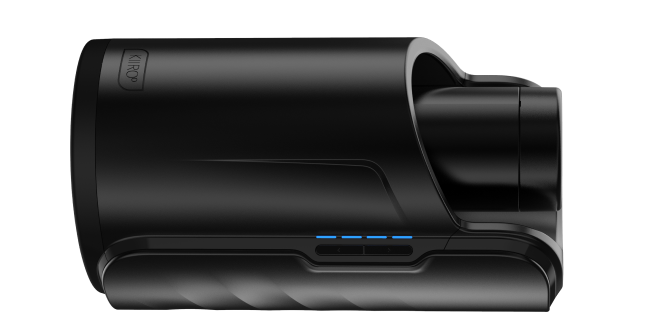 Made from ABS, PC, Silicone

Max stroke length: 3″ at base, shaft or tip
Max strokes per min: 250
Comes with sleeve/toy: no & yes/deals
Battery run time: 60 mins
Charge while using: yes
Grip/feel: dependant on your fleshlight 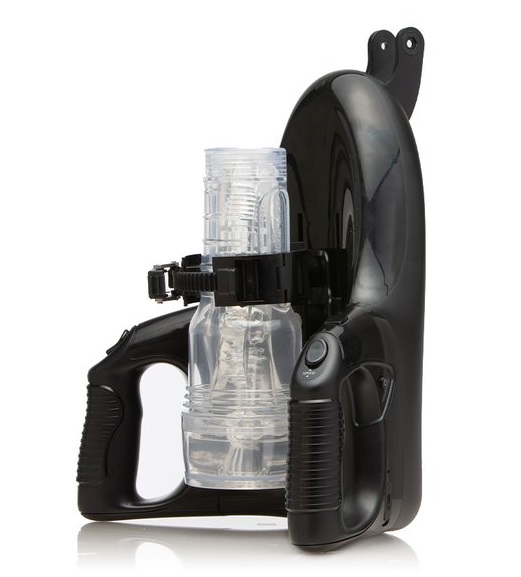 Sure, it’s bulky but it’s the one of the few automatic stroking machines that gets consistently good reviews on speed and stroke length.

The Universal Launch by Fleshlight comes a little after the release of their “Fleshlight Launch Interactive Male Masturbator” where Fleshlight teamed up with Kiiroo, another brand of interactive sex toys to produce something users feel a little sad to see discontinued, however Kiiroo took up the mantle and went on to create a new improved version called the Kiiroo Keon – as is discussed as first choice auto-stroker.

The Universal Launch is an automated device which locks in your fleshlight of choice – full size versions only although it will hold other non-fleshlight strokers, and using the light-up rocker switches you can choose between 4 variable stroke lengths and 4 different speeds with max delivery at 250 strokes a minute.

It’s advised to use super slippery lube like Astroglide with the Universal Launch and preferably an orifice which isn’t too tight, the Go Torque Ice comes user recommended.

Which fleshlights the Universal Launch works with

As to which fleshlights slot into to Launch, they are the following ranges:

The Launch is by no means the most convenient travel companion. In height it stands 15.25 inches with a phone mount on top for extra measure, but with its design it’s able to deliver pleasure to three different member zones: the base, shaft and tip and weighs in at only 3.2lbs.

On a full battery you’re good to go for an hour, not the two hours you got with the first Launch but you can plug it in and charge while using unlike the Keon. It also delivers the same stroke speeds and stroke lengths as the original Launch which were the main appeal of Fleshlights first automatic stroker.

Use while plugged in

No compromises on speed/stroke length from original Launch

Comes with handles unlike original can-shape

Will rest on thighs hands free

Can be used horizontally

Bit steep with no fleshlight included

Not wifi or bluetooth enabled 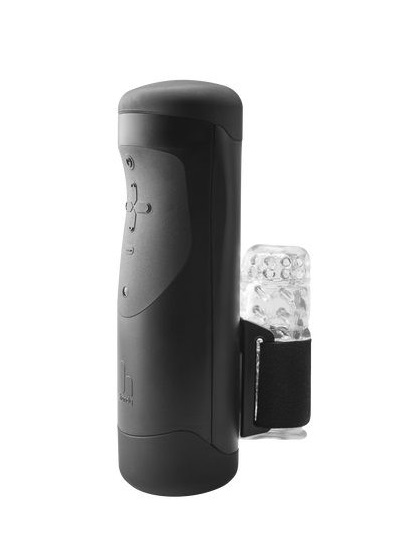 The Handy focusses on three core elements: grip, power and speed. At max speed it can deliver up to 10 strokes per second, that’s 600 per minute – how long you can last though is the question.

It also runs straight from the mains  – no battery, so time is not your enemy.

Unlike the Keon and the Universal Launch, your pleasure toy sits outside the male masturbatory-machine, it’s not encased within it or cloaked around it.

Designed in Oslo, The Handy gets rave reviews on reddit although some should be taken with a mild pinch of salt, as they do read a little manufactured.

How the Handy compares with the Keon & Universal Launch

On battery: runs on mains – no battery. Battery would increase weight & ruin its ergonomics but restricts its travel capabilities.

On sleeve: like the Keon it comes with its own pleasure sleeve in a case or others can slot in.

On performance: it has the highest speed stroke at 10 strokes a sec.

On price: slightly cheaper of the three.

On hygiene: cab be cleaned inside out.

Tips for using the Handy

Ideas that have been posited to the Handy in their latest sleeve design competition on reddit include creating a self-lubricating sleeve and one more cone shaped, so it gets skinnier towards the top – something that pushes down on you for more sensation.

Also a softer sleeve. The sleeves are soft just like the Fleshlights, but for extra soft, there is clearly a market for that.

And while they’re piecing together their new design they have also released in beta version the Handy Feeling, you just need your connection key and you can then sync up. The Handy Feeling hosts many more videos and VR capabilities so if you don’t like their readily available content, the Handy Feeling App hosts a lot more.

Fastest out there, 10 strokes a sec

Can turn the sleeve inside out to clean

Standard sized fleshlights are too heavy

Motor can get warm

No randomization mode unless through VR

More expensive, but efficient and fascinating to say the least: